You will hear back from staff within 72 hours (school days) of submitting the Concern Reporting Form.
The chart below may help you identify what to report or call the situation you are concerned about. 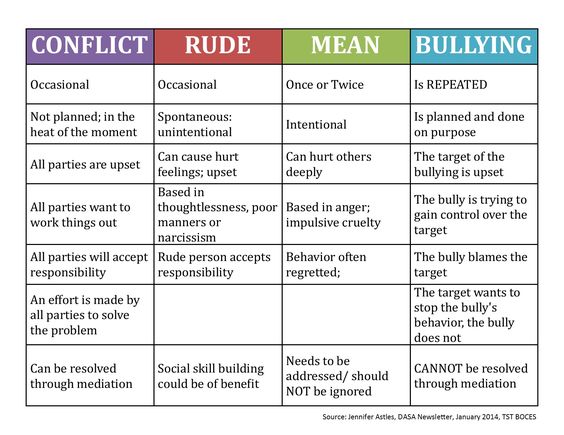 The Los Gatos Union School District prohibits any discrimination, harassment, intimidation, and bullying of any student based on the student's actual race, color, ancestry, national origin, ethnic group identification, immigration status, age, religion, marital or parental status, physical or mental disability, sex, sexual orientation, gender, gender identity, or gender expression; the perception of one or more of such characteristics; or association with a person or group with one or more of these actual or perceived characteristics.

Prohibited discrimination, harassment, intimidation, or bullying includes physical, verbal, nonverbal, or written conduct based on one of the categories listed above that is so severe and pervasive that it affects a student's ability to participate in or benefit from an educational program or activity; creates an intimidating, threatening, hostile, or offensive educational environment; has the effect of substantially or unreasonably interfering with a student's academic performance; or otherwise adversely affects a student's educational opportunities.

When the circumstances involve cyber-bullying, individuals with information about the activity are encouraged to save and print any electronic or digital messages that may constitute cyber-bullying.  This evidence will assist the administrator or supervisor in completing his/her investigation of the complaint.

Reasonable efforts will be made to keep a report of bullying or harassment and the result of the investigation confidential. The Board also prohibits any form of retaliation against any student who files a complaint or report regarding an incident of discrimination, harassment, intimidation, or bullying.

ALL students have the right to feel safe and included at school so they can thrive academically and socially regardless of race, gender, religion, ability, national origin, sexual orientation, gender identity, or any other perceived differences. Harassing, bullying, taunting, teasing, or physically harming a person or a person’s property is unacceptable.

Consequences for bullying, harassing, taunting, or teasing others can be varied by the incident and may include a verbal or written apology, loss of privileges, behavior contracts, required school-based counseling, connection with the school resource officer, or removal from an activity.  Outcomes may also include suspension.

Dan Olweus, an world authority on bullying and bullying behavior defines it this way: "A person is being bullied when he or she is exposed, repeatedly and over time, to negative actions on the part of one or more other persons." What differentiates bullying from other aggressive acts is that the student who bullies intends to harm, there is more than one incident, and an imbalance of power makes it hard for the child who's being bullied to defend him/herself. This difference in power can be physical—the child who bullies can be older, bigger, stronger; or several children can gang up on a single child. It can also be psychological, which is harder to see but just as potent—the student who bullies can have more social status or a sharper tongue, for instance. (Rigby, 2001b).

Verbal bullying includes name-calling, insulting, intimidating, mocking, threatening, and making racist, sexist, or sexual comments. Different from taunting, teasing in severity only. When does teasing cross the line and turn into bullying? The answer often lies in the perspective of the person being teased or bullied.

Physical bullying includes a variety of behaviors such as hitting, kicking, shoving, and taking or destroying property.

Relational bullying uses relationships to control or harm another person, excluding them from the group or events, talking behind their back, spreading rumors, telling lies about them, giving them the silent treatment, etc.

Harassment covers a wide range of behaviors of an offensive nature. It is commonly understood as behavior that disturbs or upsets, and it is characteristically repetitive and unwanted. In the legal sense, it is behavior that appears to be threatening or disturbing.

Sexual harassment is any unwelcome sexual behavior, including words or actions, unwanted attention, advances, or offers of/for a sexual nature.

It is critically important for our students to communicate with adults on the campus when there are issues or concerns. Please speak with an adult for interactions of concern - we are here to support students! It may be helpful to first complete this Concern Reporting form to seek help from a school staff member.